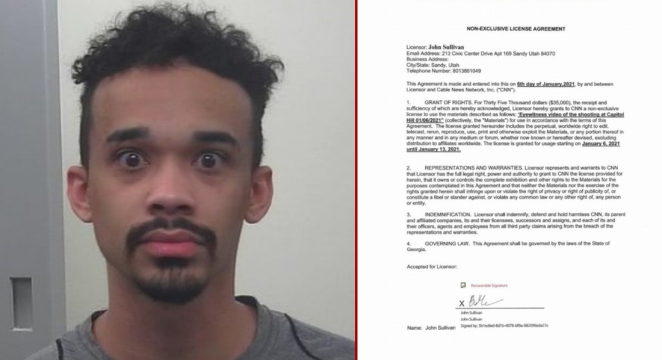 The radical Antifa/BLM agitator who infiltrated the Capitol Riots and was charged for his role in provoking criminal acts was paid off by CNN.

John Sullivan, charged for his participation in the Jan. 6 riots, was paid $35,000 apiece from CNN and NBC for his footage inside the Capitol, Kyle Cheney reported.

Politico reported that Sullivan, who had captured the death of pro-Trump demonstrator Ashli Babbitt on video after what appeared to be a staged event, and then uploaded the video and several others incriminating himself, would not be banned from social media usage.

A federal magistrate judge has turned down prosecutors? effort to block a man accused of participating in the Capitol riot from using Twitter and Facebook, but ordered him to end his involvement with a business he founded that the Justice Department says promotes and glorifies violent protests.

The defendant, John Sullivan of Utah, has maintained that he attends raucous demonstrations as a journalist, sharing videos through his Insurgence USA website and social media platforms. Sullivan?s defense attorney even filed invoices with the court showing that CNN and NBC each paid Sullivan?s firm $35,000 last month for rights to video he filmed of chaotic scenes outside and inside the Capitol, including the deadly shooting of protester Ashli Babbitt by a U.S. Capitol Police officer.